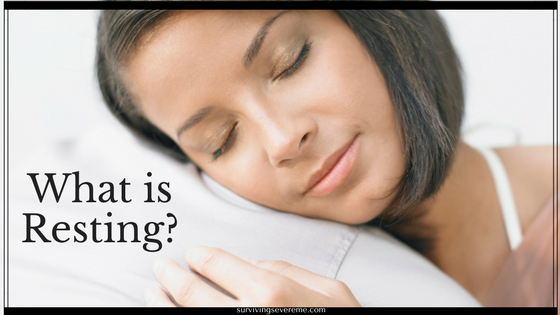 What is resting?
I consider resting to be lying with my eyes closed and limiting as much sensory input and thinking.

I think lying or reclining with your whole body supported is important as it means all your muscles can relax and rest.

I sometimes used ear plugs as well when there was lots of sounds in the house around me or outside and I couldn't stop listening. I also wore an eye mask to cut out extra light on my eyelids. Who knew lying still could be so exhausting?!


Do I have to meditate every time I rest?
No, meditation takes concentration and focus, which means energy, so doing this all the time when you're really severe is too much, at least it was for me and still is.

When I was 0% meditation wasn't as big a thing, there weren't any apps and I couldn't listen to audios so I couldn't do guided meditations.

As long as I wasn't physically doing anything, looking at something or intentionally thinking/worrying then I consider that resting.

What about breathing exercises?
If I was getting anxious I used to follow my breathing, focusing on the sound and feel so that it blocked out the thoughts but that is tiring too as it takes concentration so I didn't do it for long, just until I started to relax or got too tired to keep going but either way it normally helped a bit.

What about thinking?
When I thought or concentrated too long I used to get terrible pain in my head/brain, not headaches exactly but still awful.

I worked hard on trying not to think, to keep my thoughts still but as I grew a little better this became impossible to do and was a sign I was recovering and had a little more mental energy.

At my very weakest I could not think a conscious thought because of the pain and fatigue, so I used to focus on the sounds around me. I listened to the hum of the fridge in my room and then switched to the bubbles of the fish tank and then the traffic outside. I moved my focus from one to the other when one got too loud and overwhelming.

That was the worst but it did get better and I learnt the techniques that helped me and could call on them if I ever needed.

Now I'm doing a bit better I'm not resting for 99% of my day. I do still rest a lot because it limits my symptoms and gives me more balanced energy through the day, so I don't have boom and busts. I do a guided meditation after my breakfast, do ten minute rests on and off through out the day after every activity or when I feel tired. I sleep for 2 - 3 hours in the afternoon and then do more ten minute rests and a twenty minute guided meditation in the evening.

It works for me. You might need to do more or less. If I start to get more fatigue or worse symptoms I increase the number of rests I'm doing and decrease the amount and length of activities. It's all about balance until your energy and symptoms stabilise.

Summary
Eyes shut, try not to over think or daydream, reduce external stimulation. If you feel more exhausted by the end of whatever "relaxation/meditation" then it's probably not right for you. My aim was to feel a little less awful after each activity and to store up some energy to want to try doing something else later on.

Claire Wade. Studio 17659, PO Box 6945, London, W1A 6US
This site is written by someone who is severely affect with ME and is compiled as a result of personal experience and research of other people with ME and their families. It is intended for information and guidance only. It is not intended to replace medical advice. Readers are strongly urged to consult a professional medical practitioner for a proper diagnosis or assessment before trying any of the treatments or medications outlined. As with all medications, always consult your GP, specialist or pharmacist and tell them about other medications or herbal preparations you are already taking; always read the label and patient information leaflet.

The contributors to this website are not medically trained but all live with or have significant experience of ME. The tips may not be suitable for everyone. No responsibility for loss occasioned to any person acting or refraining from action as a result of any statement in this work can be accepted by the author.

No part of this work may be reproduced or transmitted in any form or by any means (photocopying, electronic, recording or otherwise), except for personal or non-commercial use without the permission of the author.

Claire Wade has asserted her right under the Copyright, Designs and Patents Act of 1988 to be identified as the author of this work.